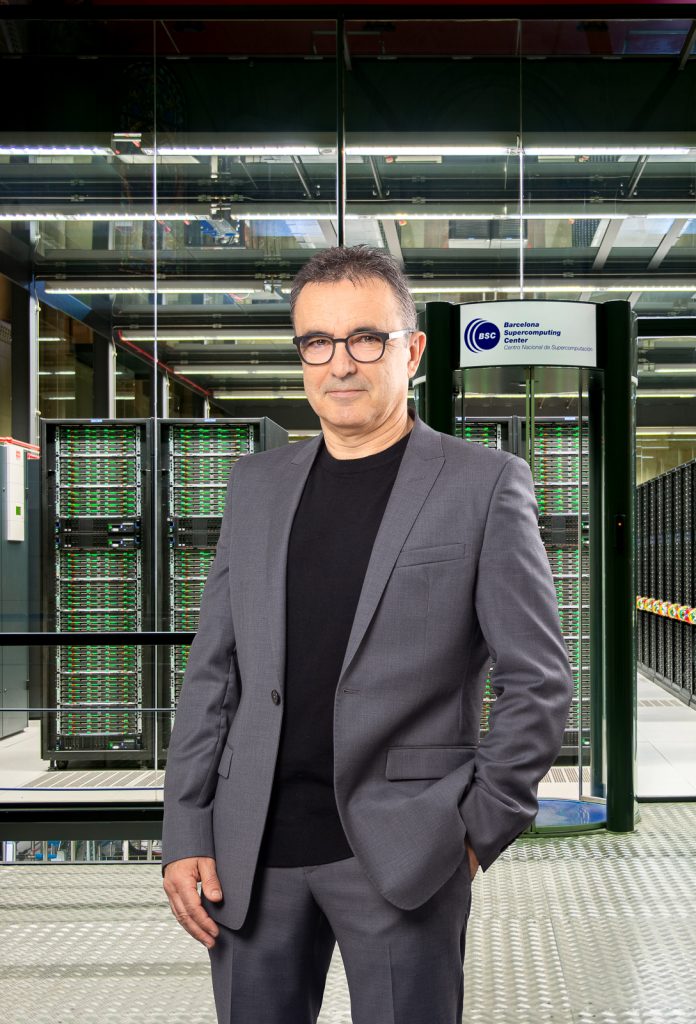 Jordi Torres is a Professor of the Computer Architecture department at Universitat Politècnica de Catalunya (UPC), where he has a long academic career in teaching, technology transfer, management, and research, with more than 200 research publications and some books in the areas of High Performance Computing (HPC) and Artificial Intelligence (AI). During his career, he has received several awards and has acted as an expert on these topics for various organizations, companies, think tanks, and as a mentor to entrepreneurs.

In 2005 he joined the Barcelona Supercomputing Center (BSC) as part of the founder’s team, becoming a research manager in the Computer Science department. Due to his creative thinking, his research group had a strategic role in combining HPC with next-generation technologies and its impact, producing relevant research publications, Ph.D. Thesis, as well as software components for HPC middleware. He is currently a Senior Researcher at the Computing Resource Orchestration and Management for Artificial Intelligence research group, working in the HPC & Transformers research line for the INCISIVE, SECURED, and NEARDATA European projects.

In parallel, his experience and pedagogical ability have also led him to hold the position of Expert Advisor in HPC & AI at the BSC director’s department to strengthen the communication of research and innovation to society. Among many activities, he gives talks, carries out projects at the intersection of contemporary culture and BSC research, collaborates with mass media, and writes books to make science more accessible to non-scientists.

I have a Master’s degree in Computer Science from the Universitat Politècnica de Catalunya (UPC Barcelona Tech, 1988). I also hold a Ph. D. from the same institution (Best UPC Computer Science Thesis Award, 1993). Currently, I’m a full Professor in the Computer Architecture Department at UPC Barcelona Tech. As a visiting researcher, I did a stage at the Center for Supercomputing Research & Development at Urbana-Champaign (Illinois, USA, 1992). I have more than 200 research publications in journals, conferences, and book chapters. I was involved in the management of many conferences organized by IEEE and ACM associations. I also served as a reviewer for relevant journals in the area. I have acted as a supervisor of 12 Ph.D. Thesis.

In 2005 the Barcelona Supercomputing Center – Centro Nacional de Supercomputación (BSC) was founded, and as one of the founder members, I was assigned as a Research Manager for Autonomic Systems and eBusiness Platforms research line in BSC. The research group produced a large number of research publications and 15 Ph.D. Thesis, as well as software components that can be applied at the HPC middleware level to improve their adaptability, efficiency, and productivity. The research group targets Supercomputing execution platforms composed of high-productivity heterogeneous multi-core systems with accelerators and advanced storage architectures deployed in large-scale distributed environments. The group grew up, and it was divided into new groups created at the Computer Science department at BSC. Then I’ve been responsible for exploring new opportunities to apply Supercomputing technology to the Artificial Intelligence arena. Thus, the new research Emerging Technologies for Artificial Intelligence has been created. During this time, my Technology Transfer activity in this area was mainly centered on a project which applies Cognitive Computing to the banking sector and a European project that uses Deep Learning and Supercomputing applied to computer vision problems. Previously, with our research group at BSC, I have participated in about thirty projects in competitive calls, and a lot of them involve University-Industry Technology Transference.

I have been lecturing on Computer Networks, Operating Systems, Computer Architecture, and Systems Performance Evaluation at the UPC Barcelona Tech. At the moment, I am lecturing on Cloud Computing and Supercomputing in the Master in Informatics Engineering in the Master in Innovation and Research in Informatics. I’m also currently teaching Deep Learning and Artificial Intelligence knowledge included in these courses. I also collaborate many times in training centers such as UPC School of Professional & Executive Development and ESADE.

I had a consultative and strategy role with academic tasks related to next-generation technology and its impact. I’m both a creative thinker and an influential collaborator; I have worn many hats, so to speak, throughout my long career. I act as an expert on these topics for various organizations, companies, and mentoring entrepreneurs. For example, I was a member of UPCnet+IThinkUPC management board, a member of the advisory board at Barcelona Big Data Center of Excellence, a member of the BSC Access Committee core team, amount many others. I hold several appointments as an independent expert by the European Commission (Information Society and Media Directorate), by Friends of Europe’s Greening Europe Forum, and was elected as an Expert of the Swiss Academy of Engineering Science. Moreover, I was elected many times as an evaluator by the Ministerio de Ciencia y Tecnología of Spain, by the Dirección General de Investigación de la Comunidad de Madrid (Spain), by the Universitat Jaume I of Castelló (Spain), by the Departament d’Universitat i Recerca of the Generalitat de Catalunya, by La Caixa Foundation, and the Science Foundation (Ireland) among other institutions. I was elected by the Fundació Centre Tècnològic de Catalunya as a member of the board of experts for elaborating on the white paper ―The contribution of ICT to the transition to a more sustainable energy model. I was invited by the European Commission to contribute to the Digital Assembly Agenda.

I’m also have been actively involved in science outreach and making science more accessible to non-scientists. I also published books about science and technology for a general audience. I have given numerous talks to different audiences, from worldwide experts to common citizens and high school students. I collaborate actively with different mass media, and I have been publishing a Blog about computing technology trends (since 2006). Last September, I joined the BSC director’s department as an Expert Advisor in HPC & AI.

I currently have the recognition of 5 “Research Tracts” (Tramos de investigación) conceded by the “National Commission for the evaluation of research activity” (CNEAI). During my career, I have received some Best Paper Awards,  an IBM Faculty Award, “Menció FIBER”,  some grant awards during my stage as a doctoral student, etc.

As for my hobbies, Mountain biking and running are some outdoor activities that I love. I have created and designed many artworks since I started to paint many years ago.

This website uses cookies to improve your experience while you navigate through the website. Out of these, the cookies that are categorized as necessary are stored on your browser as they are essential for the working of basic functionalities of the website. We also use third-party cookies that help us analyze and understand how you use this website. These cookies will be stored in your browser only with your consent. You also have the option to opt-out of these cookies. But opting out of some of these cookies may affect your browsing experience.
Necessary Always Enabled

Any cookies that may not be particularly necessary for the website to function and is used specifically to collect user personal data via analytics, ads, other embedded contents are termed as non-necessary cookies. It is mandatory to procure user consent prior to running these cookies on your website.